Activated protein C (APC) resistance (APCR) is a relatively common hypercoagulable condition that increases the risk of venous thrombosis (1-3). The most common genetic risk factor responsible for APCR is a mutation of the Factor V (FV) gene, in which an arginine at position 506 is replaced by glutamine (1). This single point missense mutation is termed ‘FV Leiden’ (FVL), and reduces the ability of APC to cleave activated factors FVa and FVIIIa, leading to increased thrombin generation, continued clot formation, and thus a hypercoagulable state with increased risk for thrombosis (1-4). Although up to 90% of APCR cases arise from the FVL mutation, and presence of APCR confers thrombosis risk, not all thrombosis affected patients are positive for APCR, nor does testing positive for APCR necessarily indicate that future thrombosis will occur (1,5-8). APCR can also occur as an acquired condition from various causes, for example from raised FVIII levels, and additional risk factors can compound thrombosis risk, including haematological malignancies, older age, trauma, surgery, pregnancy, hormone replacement therapy, the oral contraceptive pill and the G20210A mutation causing elevated prothrombin levels (5-8).

APCR testing is based on functional clotting assays, where a ratio is typically calculated from the clotting times with, versus without APC. This ratio is used as measure of APCR (2,4,9). Instead, testing for FVL comprises genetic assays (1,5,10).

The Royal College of Pathologists of Australasia Quality Assurance Programs (RCPAQAP) is an international external quality assessment (or assurance; EQA) provider based in Australia (11). RCPAQAP offers EQA APCR testing as part of the Thrombophilia program. In general, participants utilise either activated partial thromboplastin time (APTT) or Russell viper venom time (RVVT) based methods to perform APCR clotting assays. Further, some (but not all) participants add FV deficient plasma (FVDP) to the assay, which improves discrimination of the FV-driven APCR (2,4,9), for both APTT and RVVT based methods, in the presence or absence of vitamin K antagonist (VKA) therapy, but not in the presence of direct oral anticoagulant (DOAC) therapy.

Correct identification or exclusion of APCR is the end point aim of performance of these tests, irrespective of whether APTT or RVVT based methods are utilised, and irrespective of inclusion or not of FVDP. The aims of this report are to identify recent trends in testing for APCR, and to analyse which methods, and reagent kits, are best at identification of APCR versus most at risk of reporting false positive and/or false negative APCR.

The RCPAQAP distributes four APCR samples per year to approximately 66 current participating laboratories (11). Data for this report was collected from the past 10 years, from March 2010 to August 2019, representing a total of 40 RCPAQAP samples. The RCPAQAP aims to distribute similar numbers of APCR positive and APCR negative samples in each year. APCR ratio results, interpretations, reagents, and methods reported by participants were analysed, as were annual enrolment numbers. False positive and false negative rates were calculated per sample, using peer group consensus to define presence or absence of APCR, and for each reagent method/kit, over the past 10 years. Thus, ‘false positive’ interpretations are defined as those where a negative APCR sample was reported as positive, while ‘false negative’ interpretations are defined as those that were reported as negative on an APCR positive sample.

This 10-year retrospective review has identified many changes in methods and reagents used by enrolled participants, as well as accuracy of interpretation. The number of participants in the RCPAQAP APCR EQA program increased overall by 18% from 2010 to 2019 (Table 1). Over this period, there was a significant number of laboratories who ceased participating in the program (n=22); however, this was offset by 32 new enrolments, leading to overall growth in the program (Figure 1; Table 1). Individual kit uptake varied throughout this period. Eight different commercial APCR reagent kits have been in use over the past 10 years, with some growing considerably in popularity; in particular, Pentapharm’s Pefakit saw an 80% increase and Stago’s Staclot an 83% increase (Figure 1). In comparison, other kits have diminished in use, with Trinity’s aPCR reagent and Chromogenix’s Coatest respectively decreasing to 1 and 0 users. The enrolment numbers for the other reagents have remained fairly stable (Table 2); however, RVVT based methods have slowly come into favour over APTT based methods. From 2010 to 2012, APTT based APCR assays were used by the majority of RCPAQAP participants. RVVT based assays became the preferred method in 2013, and have continued to be so since (Figure 2). In 2019, 39 of 66 (59%) responses came from participants using RVVT based assays, 11% more than in 2010 (Table 3). 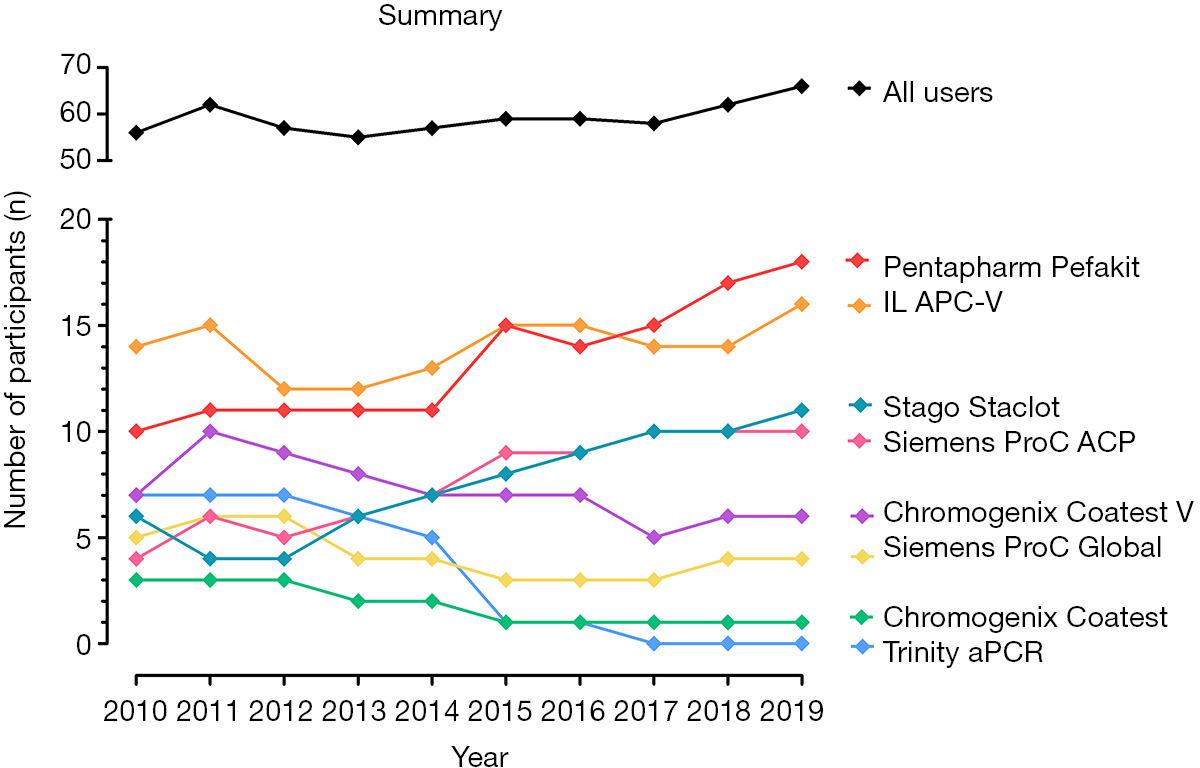 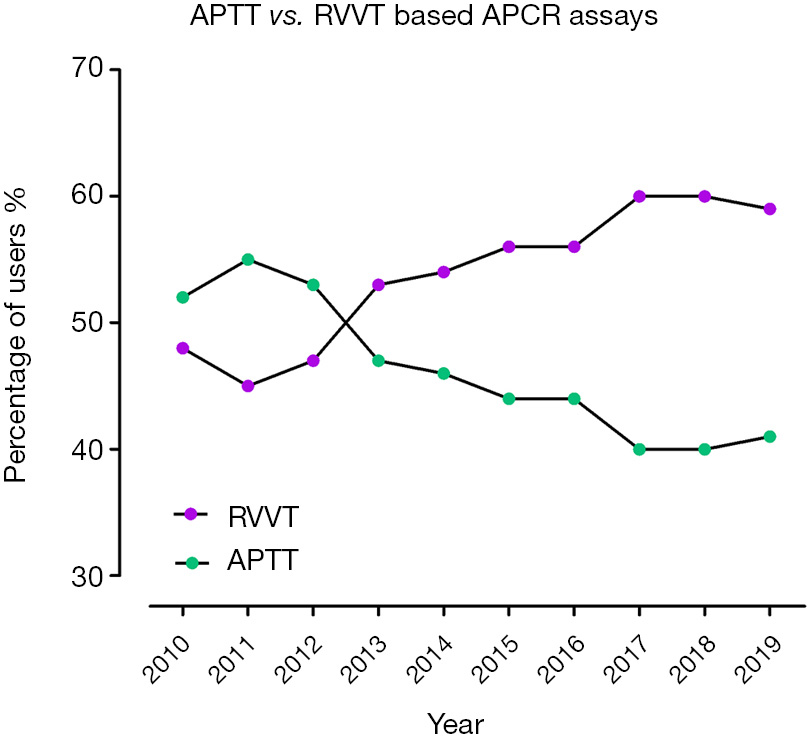 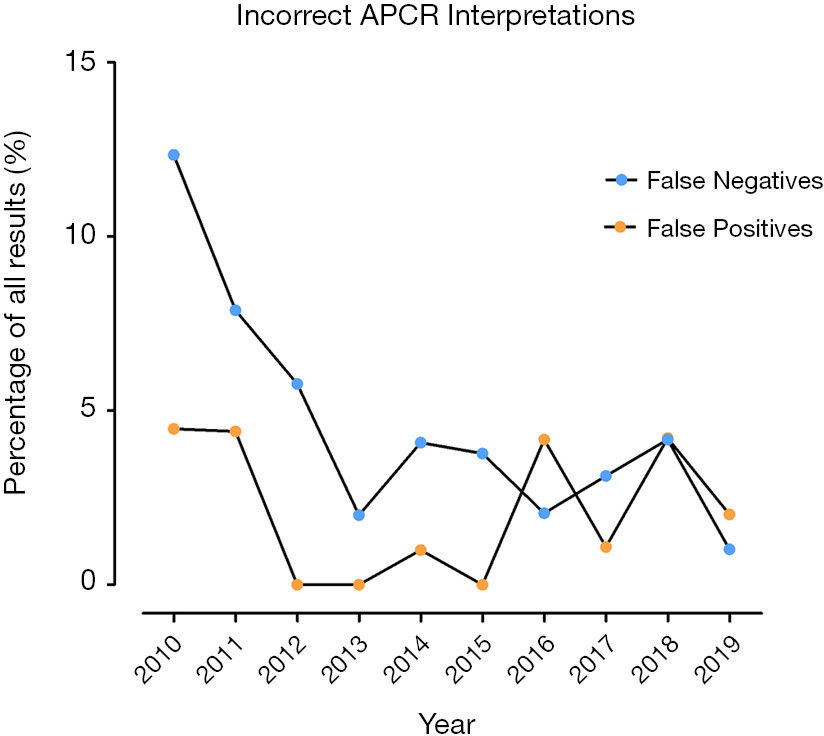 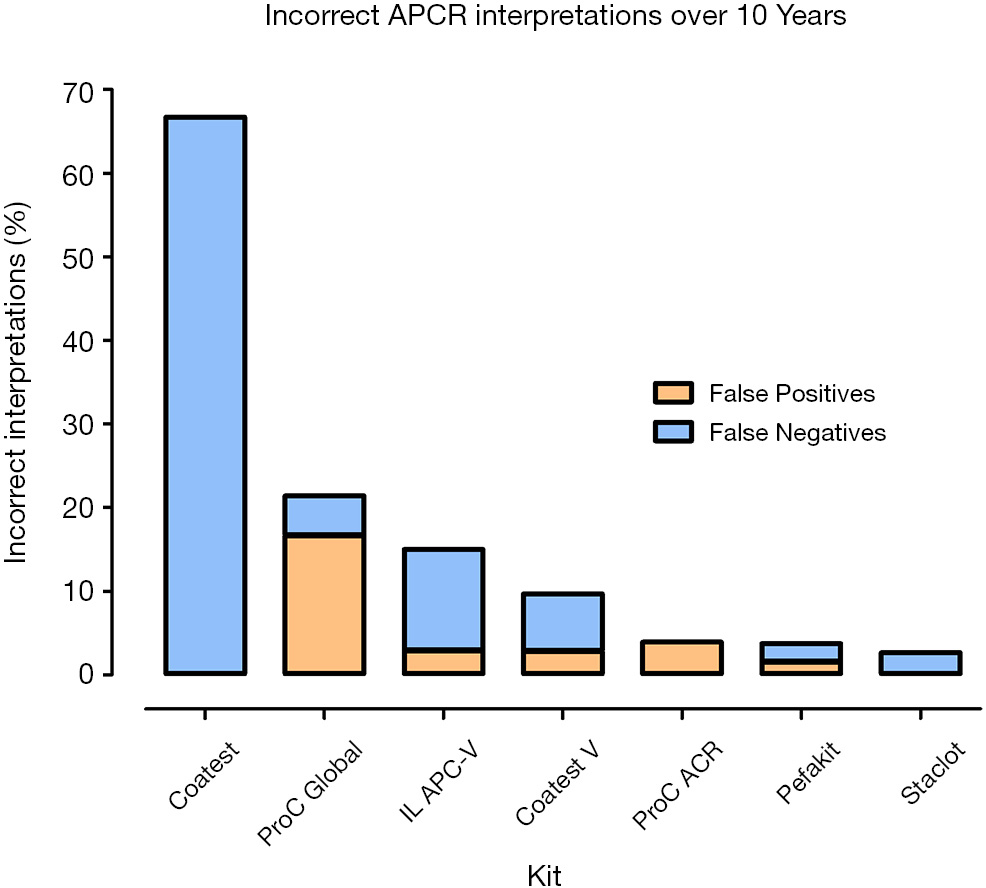 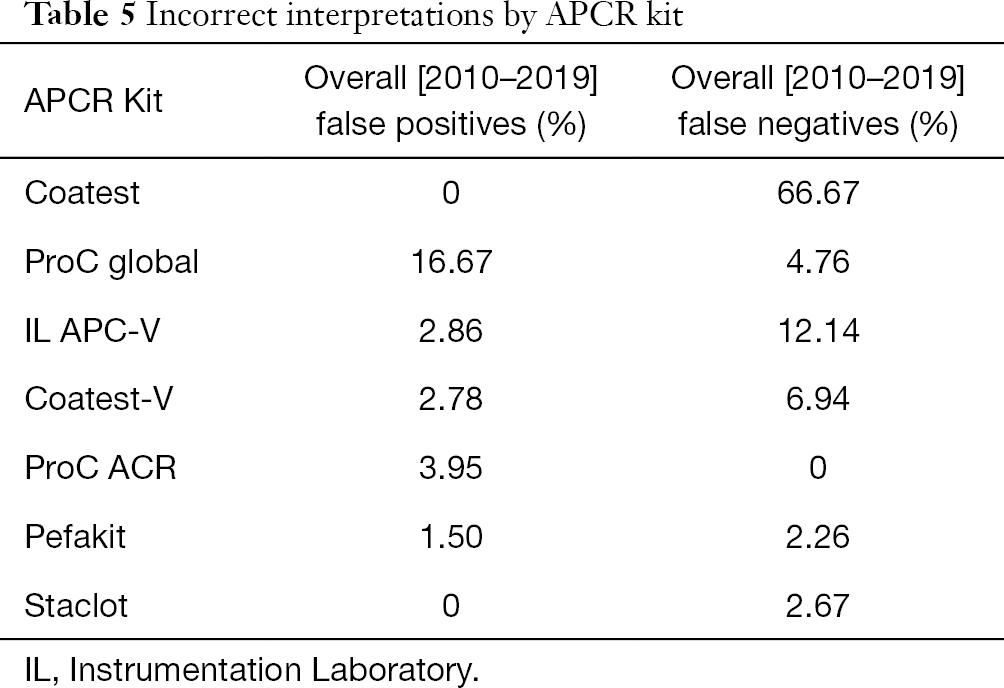 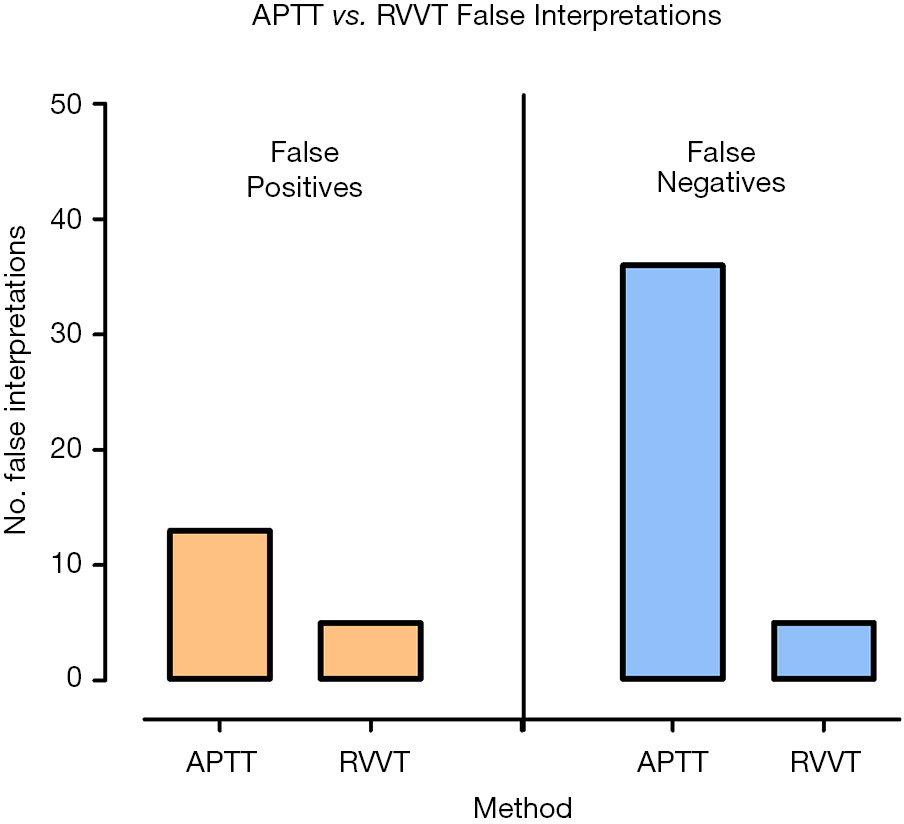 Over the 10-year period of analysis, there was a significant number of enrolling (n=32) and unenrolling (n=22) participants in APCR testing, with an overall increase in growth. By 2010, APCR testing had been in laboratory use for nearly 20 years. Nevertheless, not all haemostasis laboratories would have taken it up during this time. As the assay has become more mainstream during the years of our analysis [2010–2019], we naturally saw an overall increase in enrolments. Laboratories who stopped participating in the program may have instead moved to direct molecular testing of the FVL mutation (1,10). Further reasons for not re-enrolling may have been due to building evidence in the literature that thrombophilia assays are over-utilised by clinicians, often in inappropriate situations such as whilst on anticoagulant therapy (5,6,10,12). There is also a risk of over diagnosing APCR (and FVL) as a risk factor for thrombosis, since up to 5% of normal Caucasians can be identified to have ACPR (or FVL) (1,4,10), and many of these will not suffer from an APCR or FVL related thrombosis event. Potential adverse outcomes of irrelevant diagnosis in the absence of additional risk factors include risk of overtreatment, health/life insurance implications and psychological distress to the patient being diagnosed with a haematological and/or genetic abnormality (5,6,10,12).

Pefakit and Staclot APCR kit use evidenced the most growth over the past 10 years (80% and 83% respectively). Participants may prefer these reagents due to their low error rates, as indicated in Figure 4, and/or being suitable to use on particular manufacturer instrumentation (e.g., Stago). Pefakit is now the most widely used APCR kit by RCPAQAP participants. Its popularity is likely due to the reagent’s robustness to interference by anticoagulants, including DOACs, which otherwise affect RVVT-based testing (13-17). Explanation of the diminished number of users for Trinity’s aPCR reagent and Chromogenix’s Coatest probably lies in the trend that laboratories are moving away from APTT based assays (including Trinity aPCR and Coatest) to RVVT based assays, given better performance of RVVT assays for identifying/excluding APCR. Indeed, 100% (10/10) of the participants in this evaluation who have moved away from Trinity aPCR and Coatest have since adopted an RVVT based assay.

The move away from APTT based, to RVVT based ACPR assays is further illustrated in Figure 2. This trend is likely due to the findings published in many studies that RVVT based methods are more sensitive to the presence of FVL, than APTT based methods (2,4,9). Although APTT based methods are potentially more sensitive to acquired APCR, especially if due to raised levels of FVIII, FVL related APCR is overall more clinically significant as it explains up to 90% of cases of APCR, as arising from the FVL gene mutation (1,2). The addition of FVDP as a diluent improves the discrimination of APCR for both APTT and RVVT methods (4,9), at least in the absence of anticoagulant therapy, with many kits now including FVDP in their own reagents.

Participant’s ability to interpret APCR ratios as ‘positive’ or ‘negative’ for APCR has improved over the 10-year period of analysis. The percentage of incorrect interpretations dropped most notably for false negatives, while false positives followed a less consistent pattern (Figure 3). This is likely due to the move away from APTT towards RVVT based APCR assays, which appear to be more robust in terms of true detection of APCR (i.e., low false positive and false negative events).

The Coatest reagent (without FVDP) had the highest percentage of incorrect interpretations; however, the users of this reagent represented a small group, with a maximum of 3 participants per year. The four kits with the highest rate of error (Coatest without FVDP, ProC Global, IL APC-V and Coatest-V) are all APTT based, highlighting that APTT based assays are less sensitive to APCR. Further, Figure 5 indicates that APTT based methods returned the most incorrect interpretations for both false positives and false negatives. We hypothesise that RVVT based methods, especially those least sensitive to anticoagulant interference, will continue to grow in popularity, as more studies such as this are reported.

Once APCR testing is initiated by a clinician, then there is significant clinical importance in correctly identifying positive and negative APCR samples. Similar to the potential harm from overdiagnosis (as noted above), false positive interpretations could also result in an incorrect diagnosis. Conversely, false negative results may lead to the exclusion of an APCR diagnosis, leaving patients potentially less prepared if a thrombotic event occurs. Thrombosis driven events can be devastating in the case of pulmonary embolism, ischemic stroke, myocardial infarction or other organ damage. Further, a lack of understanding of thrombosis risk can delay the time to treatment in such medical emergencies.

In relation to thrombophilia testing (of which APCR is just one test offering among many), inappropriate testing, particularly while on anticoagulant therapy, increases the risk of both positive and negative events (i.e., false conclusion of presence of a thrombophilia marker or false conclusion of absence of a thrombophilia marker (6,15-19). Also of interest, use of FVDP predilution, although normally yielding test results better reflective of FVL status in both VKA therapy and no therapy samples, may lead to higher rates of false positive/negative events in DOAC samples (19).

We recognise several study limitations. First, the report relates to a large number of APCR test methods, but cannot speak to methods not used by participants of the RCPAQAP program. Also, some methods were used by only a small number of participants which makes analysis less robust. Finally, the source of APCR test plasmas would create a selection bias—i.e., use of a different test sample set may generate different findings.

Overall, we have seen an increase in APCR users, with participants reporting fewer incorrect interpretations over the past 10 years, as representing the period of study analysis. APTT based methods resulted in more false negatives and false positives than RVVT based methods. We believe this is a major reason why users are moving from APTT to RVVT APCR assays. Further, active participation and review of performance in the RCPAQAP Thrombophilia program has likely been a contributing factor to better performance in identifying APCR.