Von Willebrand disease in the United States: perspective from the Zimmerman program

In the United States, historical testing for VWD used the von Willebrand factor (VWF) antigen assay (VWF:Ag) as a measure of VWF quantity and VWF ristocetin cofactor activity assay (VWF:RCo) as a measure of platelet binding activity. However, the VWF:RCo assay has a number of problems that affect its reliability in diagnosis of VWD, including poor inter-laboratory reproducibility (1,2) and erroneous values in the presence of certain normal VWF variants (3). The requirement of ristocetin to induce VWF interactions with platelet GPIb has been overcome with recent assays using a gain of function GPIb to allow for spontaneous binding in the absence of ristocetin (4,5). The International Society on Thrombosis and Haemostasis has termed this version of the VWF activity assay VWF:GPIbM, to acknowledge the use of a mutated GPIb (6).

In the future, the VWF:GPIbM may become the favored measure of VWF-platelet interactions, but most commercial laboratories in the United States continue to rely on the VWF:RCo. The VWF activities presented here were performed with the former VWF:RCo, but our laboratory at the Blood Center of Wisconsin does now have a VWF:GPIbM assay available. Clinical practice varies, in that some clinicians will order VWF:Ag and VWF:RCo, while some will order only one of these (if one is performed, it is usually the VWF:RCo). In some cases, multimer analysis is performed initially, but in other cases, multimer testing is reserved for second line testing. A few commercial laboratories offer VWF collagen binding (VWF:CB), but this is seldom performed in the United States outside of research settings.

Our clinical laboratory has piloted a novel approach to VWD testing, involving a tiered reflexive approach (Figure 1). First line testing on samples submitted for consideration of VWD includes FVIII, VWF:Ag, VWF:GPIbM, and VWF collagen binding (VWF:CB) with type 3 collagen. If any of these are abnormal, specific additional tests are performed depending on the abnormality. Multimer analysis is performed if either the VWF:GPIbM/VWF:Ag or VWF:CB/VWF:Ag ratio is low, to investigate potential loss of high molecular weight multimers. Multimer analysis is also performed if the VWF:Ag is <30 IU/dL to confirm a normal multimer distribution, allowing for a firm diagnosis of type 1 VWD. A VWF propeptide (VWFpp) assay is performed if the VWF:Ag is <30 IU/dL, to evaluate for clearance defects. VWFpp may also be helpful to evaluate for a possible clearance defect when the VWF:Ag is very low (7). Depending on the first line test results, a VWF:platelet binding assay looking for type 2B VWD may also be performed (8). If the FVIII/VWF:Ag ratio is low, VWF:FVIII binding is performed to assess for type 2N VWD, although hemophilia A can also present with an isolated decrease in FVIII. When type 2A, 2B, 2M, or 2N are suspected, sequencing of VWF exons known to harbor related variants is suggested. Sequencing of the full VWF gene may be recommended in type 3 VWD for the purpose of identifying affected family members in the setting of prenatal testing. Our definitions of VWD types are listed in Table 1 along with the accompanying laboratory findings. 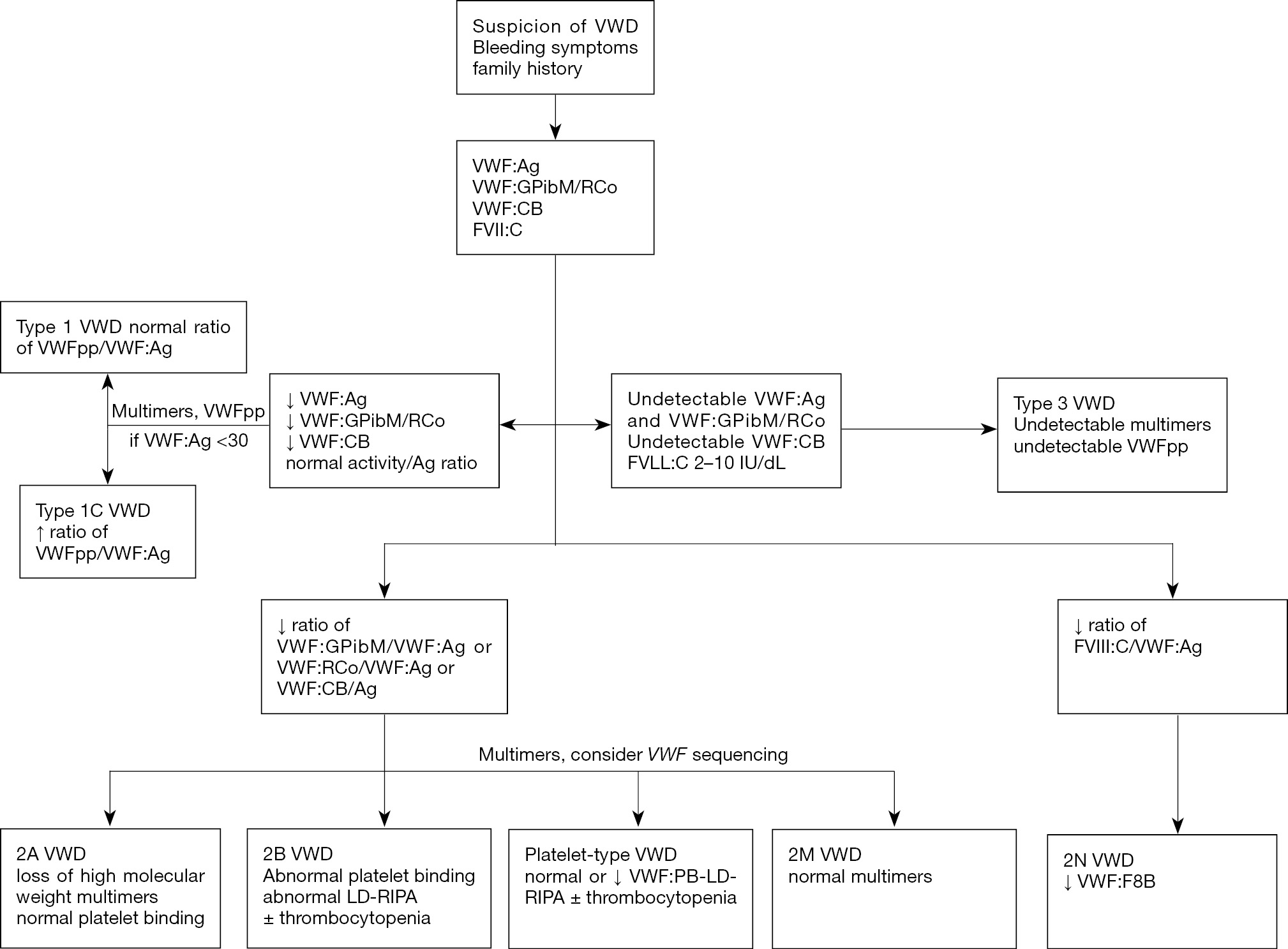 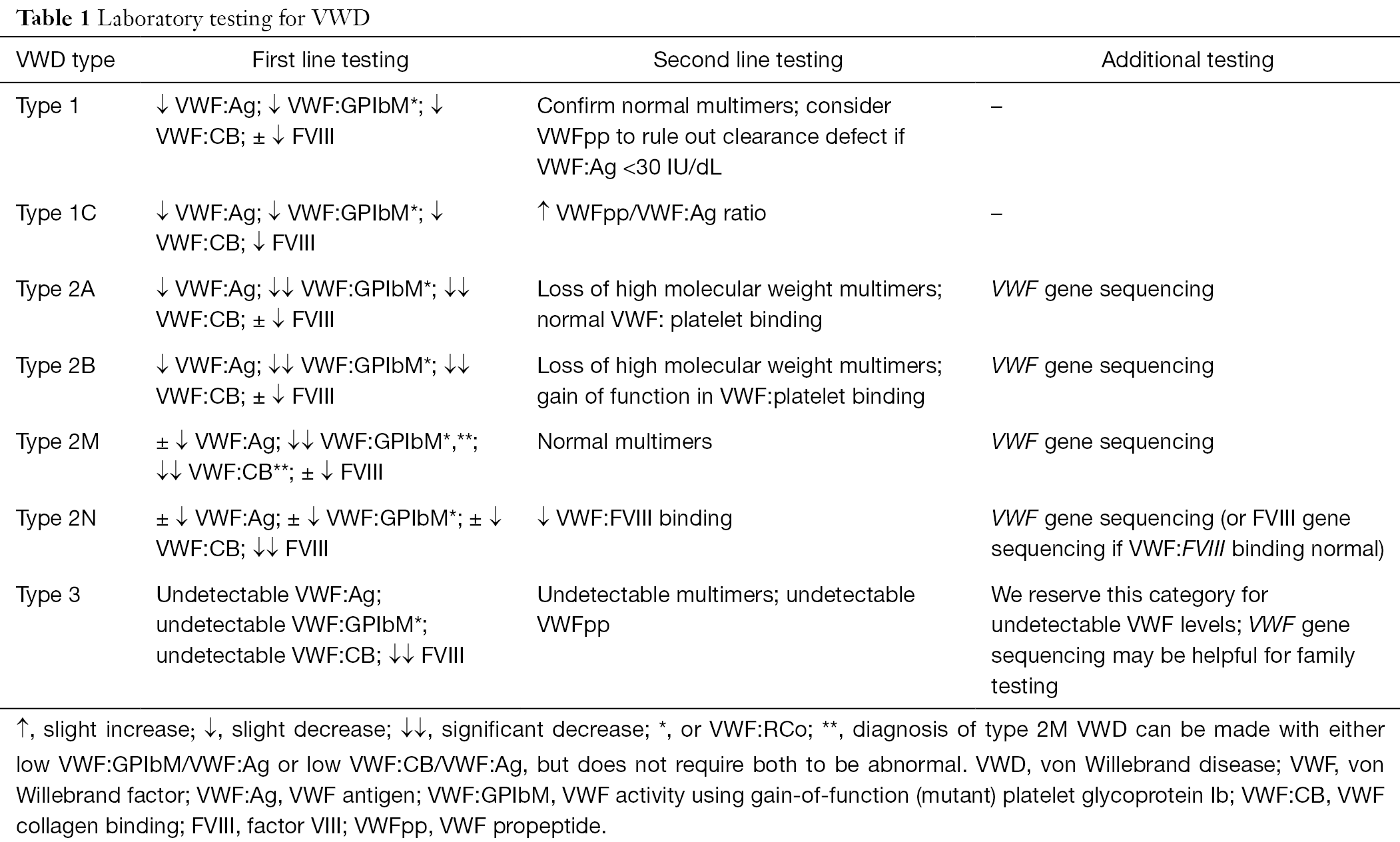 The rationale for identifying clearance defects apart from the general type 1 category is that in these cases, the response to treatment may differ. VWF clearance defects, typified by the Vicenza variant but including other N and C terminal VWF variants, demonstrate a hyper-responsive but very short-lived response to desmopressin (7,9). Therefore, treating clinicians should not use desmopressin when sustained elevation of VWF levels is desired.

Exclusion of multimer testing from the first line of assays allows for quicker and more efficient results, with the more labor intensive multimer assay performed only on a subset of samples. However, some clinicians still recommend inclusion of multimers as a first line test due to the risk of not detecting a multimer defect that still presents with normal VWF activity. This has been seen with some cardiac valve defects and in those cases may be associated with clinically relevant bleeding.

It should be noted that the formal cut-off for diagnosis of type 1 VWD remains a subject of debate (10). Mild bleeding symptoms are common, and therefore patients could have coincidental low VWF and mild bleeding. Patients with blood type O normally have lower VWF levels than patients with other blood types, and therefore a VWF level below the normal reference interval does not necessarily guarantee the presence of symptomatic VWD (11). Some groups have suggested a cut off of 30 IU/dL for type 1 VWD (12,13). However, since borderline low VWF levels may be a risk factor for bleeding, we consider treatment for any patient with bleeding and low VWF levels.

VWD across the United States

Some data on VWD in the United States is available from the Zimmerman Program for the Molecular and Clinical Biology of VWD (Zimmerman Program). The Zimmerman Program has enrolled 256 healthy control subjects and 741 VWD subjects to date. The study was designed to sample VWD across the United States with primary enrollment centers in Atlanta, Detroit, Houston, Indianapolis, Iowa, Milwaukee, New Orleans, and Pittsburgh (please see Supplementary for full list of investigators). A number of secondary enrollment centers also contributed subjects and are listed in Supplementary. All subjects were enrolled based on a pre-existing diagnosis of VWD. Table 2 shows the demographics of the Zimmerman Program subjects based on their VWD diagnosis. Table 3 shows the percentages of patients with VWD of each type currently being followed by our local center. 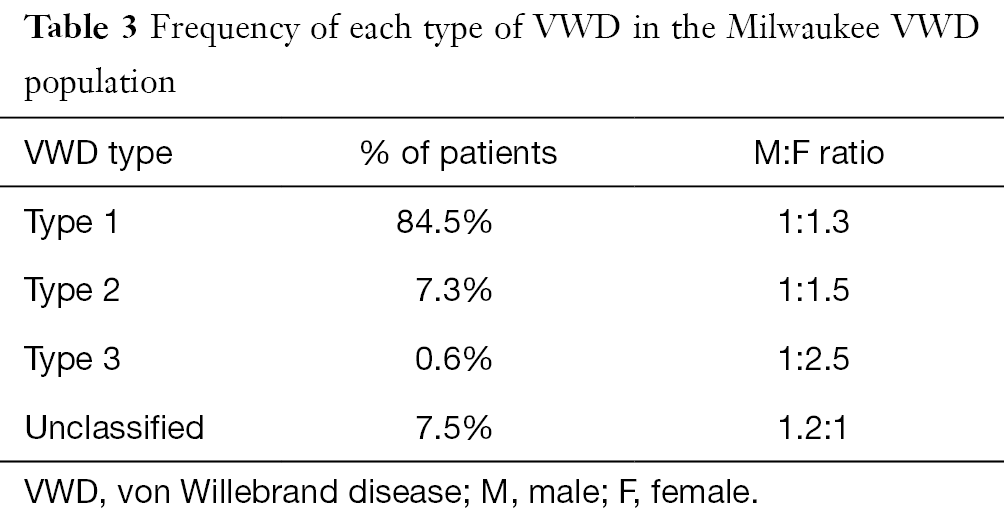 One of the interesting results from this study is the number of subjects with a history of VWD who had normal laboratory testing at study entry. Of the initial group enrolled with a diagnosis of type 1 VWD, only 64% had low VWF levels at the time of study entry (14). The remaining 36% had entirely normal VWD testing. However, these subjects had bleeding scores similar to the subjects with confirmed low VWF levels (Figure 2). 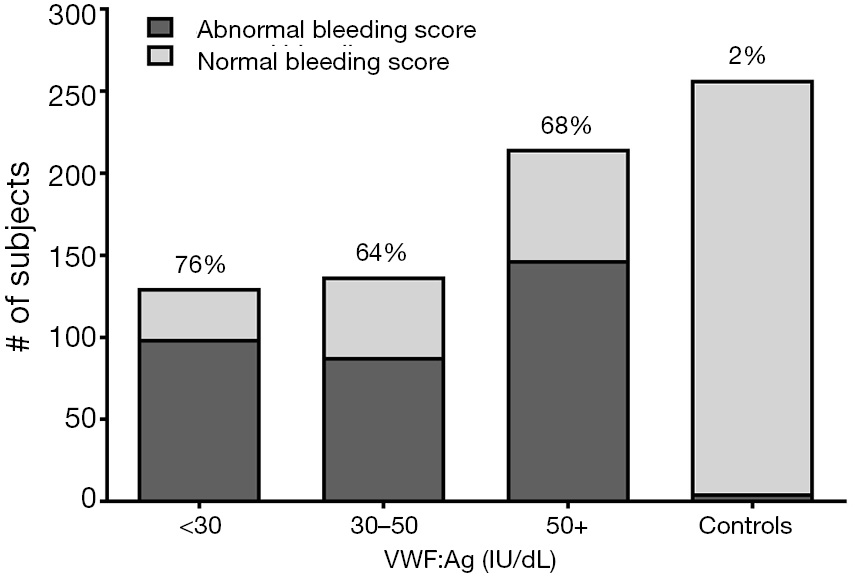 There are several possible explanations for this. One is that VWF levels increase with age, such that relatively mild deficiencies of VWF can resolve over time. Another is that older patients may be experiencing concurrent inflammatory states that result in a rise in VWF into the normal range. A third possibility, however, is that some patients were given a diagnosis of VWD based on a single lab value that was lower than the normal population reference interval, with the desire to make a diagnosis in a patient experiencing bleeding.

This last hypothesis is in part borne out in subjects for whom pre-existing data is available. Of 172 subjects with type 1 VWD whose study entry laboratory testing was normal, 26% had a single low VWF:RCo with a corresponding normal VWF:Ag. Of the remaining subjects, 10% had a single low VWF:Ag, 37% had low VWF:Ag and VWF:RCo, and the remaining subjects had only normal VWF levels recorded. In these subjects, it is tempting to speculate that the original clinician, faced with a patient who presented with bleeding symptoms (and perhaps responded well to desmopressin), considered the diagnosis of type 1 VWD as final. However, with further repeat testing being normal, it is possible that the original patient had a mild platelet function defect, other coagulation problem, or a combined defect as the main cause of the bleeding, rather than truly being affected with VWD or low VWF.

There were some subjects with known co-existing conditions at the time of repeat testing (pregnancy, rheumatologic disease) whose initial diagnostic VWF levels were likely inaccurate, and a number of subjects for whom no prior data was available. Now that electronic medical records are routinely used, it is likely that future patients will not have this issue, but for some of the older subjects enrolled, it was difficult to locate their initial diagnostic laboratory testing. In the past, samples were collected on ice, which has subsequently been shown to reduce VWF levels in plasma and is no longer recommended (15,16). Since subjects enrolled in the Zimmerman Program will also be followed prospectively, we hope to be able to address questions about age-related increase in VWF levels in a more prospective manner. This should also help address the question of how quickly VWF levels rise, since a large number of the type 1 VWD subjects are in the pediatric age range.

Another related issue is the high frequency of bleeding complaints even in subjects with minimal reduction in VWF. Figure 2 shows bleeding scores in type 1 VWD subjects as compared to Zimmerman Program healthy controls. There is a slightly higher median bleeding score in subjects with VWF:Ag <30 IU/dL, but still significant bleeding in those with VWF:Ag 30–50 IU/dL as compared to controls. This may be related to the way in which the diagnosis is made; bleeding patients receive a workup and are then diagnosed with VWD. There may be the occasional pediatric patient diagnosed based on family history or abnormal laboratory testing who does not have a personal history of bleeding, but in general workup and diagnosis have stemmed from initial bleeding complaints. Our bleeding score data simply reflect that bleeding begets bleeding. This has been shown more elegantly by Federici and colleagues, whose data on VWD subjects in Italy demonstrates increased bleeding score is a risk for future bleeding (17).

In some cases, VWD specific treatment is required. Most of our type 1 patients respond well to desmopressin, allowing its use for both surgical prophylaxis and bleeding treatment. We do generally perform a trial first, as not all patients respond, and some may have clearance defects. As noted above under laboratory testing, patients with clearance defects may have an initial excellent laboratory response to desmopressin, but the rapid clearance of endogenous VWF prevents desmopressin from being sufficient therapy for surgery or major bleeds. Therefore if a clearance defect is suspected, it is important to obtain a late time-point and not rely solely on response at 1 hour post desmopressin. Testing and use of desmopressin in type 2B is controversial, but some type 2A and 2M patients will obtain symptomatic relief with use of desmopressin.

In cases of type 2 or 3 VWD, or those patients with type 1 VWD and inadequate desmopressin response, VWF concentrate is the treatment of choice. Prior to the last year, only plasma derived concentrates were available, and Humate-P and Wilate are the most utilized in the United States. However, recent approval of recombinant VWF suggests this may be utilized more in the future (18).

In the United States, diagnosis of VWD remains a complex task, with no single simple diagnostic test available, but our strategy of reflex testing puts the burden on our diagnostic laboratory experts rather than on the ordering clinician, allowing a single blood sample to result in a diagnosis of a specific VWD type (Figure 1). There are a number of unanswered questions, however, including the conundrum of subjects with low VWF, and the potential for rising VWF levels with age, but it is hoped that further research will allow us to refine which patients require treatment and improve outcomes for VWD patients everywhere.

Funding: This work was funded by the National Heart, Lung, and Blood Institute of the National Institutes of Health, grants HL081588, HL102260 and HL126810, and by the MACC Fund Center for Cancer and Blood Disorders.

Conflicts of Interest: VHF has served as a consultant for CSL Behring and Shire. KDF has served as a consultant for Bayer, CSL Behring, Genentech, NovoNordisk, and Shire, and as a speaker for Alexion. RRM has a patent for a VWF:GPIbM assay that is used by the Blood Center of Wisconsin. The remaining authors have no conflicts of interest to declare.