Organized by Chinese Society of Blood Transfusion and co-organized by Guangzhou Blood Center, the 28th Regional Congress of the International Society of Blood Transfusion (ISBT) was successfully held in Guangzhou from Nov. 25 to 28. This four-day meeting has attracted experts from different countries and regions in the field of blood transfusion. Breakthroughs were shared and difficulties were discussed. Communication and brainstorm made this meeting a feast for all participants. During the meeting, Prof. Steve Henry from Auckland University of Technology delivered a speech on the topic “Application for Kodecytes in Immunohematology” (Figure 1). We were honored have a chance to interview Prof. Henry. 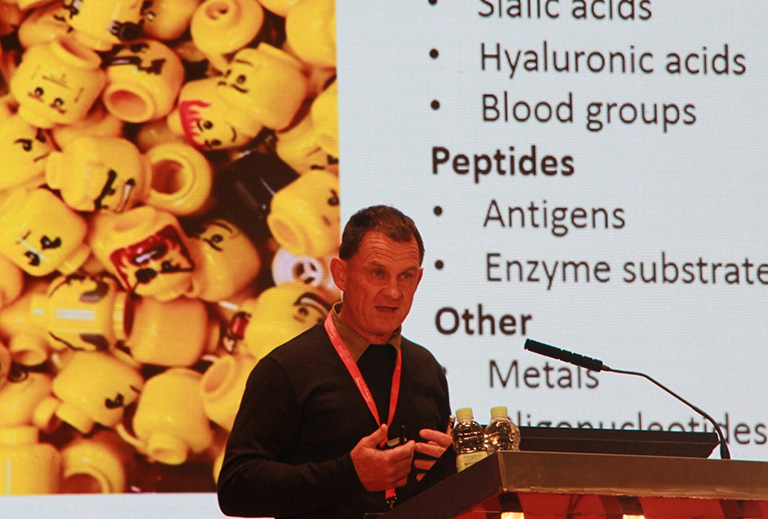 Prof. Henry has devoted his life to Kode technology for many years. He conducted a lot of research on Kode technology and also worked on commercializing it. In the interview, Prof. Henry summarized his presentation and shared more information of Kode technology. As a magic biological paint, it has been used in different ways, and there are many possibilities to be explored. “It just seems not believable,” Prof. Henry said so, but he firmly believes in it and its success. Let’s enjoy the interview!

Prof. Steve Henry is professor in Auckland University of Technology. He believes commercialization is an integral partner to successful research, so he devotes his life to bringing research to product, in order to benefit more patients.

In 1996 he started the biotechnology company Kode Biotech to commercialize his biosurface engineering technology—Kode technology. As the CEO of Kode Biotech and Professor in the AUT Centre for Kode Technology Innovation, he is fully immersed in the true commercial environment, taking research to product and developing it for the market. In 2015 Kode Biotech won the Supreme NZ Innovator Award for their contribution to the Agalimmune anti-cancer therapy innovation.

He was selected as a finalist for the 2008 New Zealand Ernst and Young Entrepreneur of the Year and the 2011 and 2017 was the recipient of the Royal Society of New Zealand’s prestigious R.J. Scott and Pickering medals for his success in both business and science.

AOB: Would you briefly introduce yourself, including affiliation and interests?

Prof. Henry: I’m Steve Henry. I’m a Professor of Biotech Innovation, with a base in School of Engineering at Auckland University of Technology. My interest is in Kode technology, a cell surface modification technology, and carbohydrate blood group systems.

AOB: You made an excellent presentation just now. Would you summarize the speech for us? Such as the main points you want to emphasize.

Prof. Henry: Kode technology is a biological paint. You can apply it onto any kind of cell. The setting we had here was being applied to red blood cell. We can change almost every system on the outside of blood cells by painting it on. It’s just like a paint, so we can change the red cell to do something different.

AOB: According to your presentation, Kodecytes can play a significant role in immunohematology. What’s the current situation of this technology?

Prof. Henry: In immunohematology, Kode has been used in multiple different ways. The first one is in a quality control system that has precise amounts of blood group ABO antigens on them. The second one is adding Asian blood group antigens onto European cells to make a diagnostic system within the Miltenberger area. What’s more, Kode has other potential areas such as advanced disease diagnostics, and it may ultimately develop to be a therapeutic such as an antidote to ABO incompatible transfusion. And it will be used in lots of areas outside the transfusion medicine, and of course research too.

AOB: Is Kode technology widely used in the world now? What’s the difficulty in promoting it?

Prof. Henry: It is not as widely used as I would like it to be. It has been used widely in the world, but it’s not been used by enough people, because most people haven’t heard of it, despite the fact that it has been published in over 32 journal papers. So it still needs to expand more widely. Research is relatively easy to do, commercializing something is a very difficult job, which may take many years. One of the biggest problems Kode technology has had is “it is too good to be true”. People don’t believe it. For example, the method of making a modified cell using Kode technology: take the cell, take the solution, and put them together. That’s it. And it just seems not believable.

AOB: As you mentioned in the presentation, there will be a Kodecyte trial in human. Could you give us a brief introduction to this trial?

Prof. Henry: It is one of the first clinical or therapeutic uses for Kode technology. In this case, we will use a blood group system that is presented on the outside of animal cells. And we will take this blood group system and turn it into Kode molecules, which will be injected to a human tumor. When you injected them into a human tumor, it changes the surface of the cancer cell, so it looks like animal tissue. Your body already knows how to attack animal tissue, so it can attack the tumor that has been injected. That one tumor then gets destroyed. But when that tumor gets destroyed, it has a lot of bio active material on the surface, and your body starts to look at the destroyed pieces of tumor. And in that process, your body sees the true tumor antigen. Now your body recognizes your own cancer, and can go out and destroy it. In theory one injection into one tumor, and all your tumor will go.

AOB: As we know, you started Kode Biotech in 1996. And since then, you have committed yourself to taking research to product. What encouraged you to begin and continue?

Prof. Henry: We started natural molecule in the very beginning. After 2001, we invented the first synthetic molecule, and we threw away everything we have learned in the first five years of our research. From then, we just kept on going. Today we have expanded it to a huge platform. So the key in this process is resilience. You need to be able to keep on going when it gets tough, and it’s going to be very tough. You have to survive a very long time. And of course, you need to get money for it. You have to earn a lot of money to support the programme. Hard work is very important.

AOB: You have achieved great success both in your business Kode Biotech and research career. Would you share your keys to success and give some suggestions to people working in this field?

Prof. Henry: First of all, you need to believe in yourself and believe you can do it. Along the way, there will be a lot of people going to tell you that you are wrong and you can’t do it. But you also get to be careful when you don’t believe in it when it really is wrong. You have to be rational about it. If it’s really good, just keep going. Another key is relationships, which you can never do on your own. You will build up more and more relationships during the process of commercialization, and those relationships will make the success.

AOB: Thank you for your sharing!

Conflicts of Interest: The author has no conflicts of interest to declare.