Antithrombotic therapy is applied to prevent or treat thrombosis in patients in a variety of clinical settings (1-5). As overview, antithrombotic therapy comprises two main classes of drugs, the anticoagulants (which inhibit various aspects of the coagulation pathways) and the antiplatelet agents (which inhibit platelet function). The anticoagulants include both parental agents such as heparin, and oral agents such as vitamin K antagonists (VKAs) (i.e., primarily warfarin) and direct oral anticoagulants (DOACs) (which include dabigatran, rivaroxaban, apixaban and edoxaban). The antiplatelet agents comprise a wide variety of drugs, but in the community setting are mostly aspirin and anti-P2Y12 receptor agents. In this series of the journal, a wide variety of papers of general or specific interest have been collated for the AOB readership.

The series begins with an exploration of global anticoagulation trends, first as specifically determined using Google Trends data (6). An electronic search simultaneously using the search terms “warfarin” AND “dabigatran” AND “rivaroxaban” AND “apixaban” AND “edoxaban”, without any applied language or geographical restrictions was carried out for a period in late 2018. Overall, warfarin (55.0%) yielded the largest number of Google searches among the five oral anticoagulants throughout the study period, followed by apixaban (22.5%), rivaroxaban (18.3%), edoxaban (4.1%) and dabigatran (0.1%). Thus, warfarin remained the predominantly searched anticoagulant agent around the world at that time. Compared to other oral anticoagulant drugs, rivaroxaban was more popular in China and in some South-American countries, apixaban was especially popular in some North-European and Latin American countries, whilst edoxaban and dabigatran were not often searched for in any country worldwide. According to the analysis, the authors concluded that warfarin remained the most popular oral anticoagulant agent around the globe, rivaroxaban and apixaban are the second and third most popular, whilst the popularity of dabigatran, the original DOAC to be released, appears to now be very limited, and edoxaban, being the latest DOAC to be released, is starting to emerge in relevance. A new contemporary search in 2020, encompassing the last 3 months, uncovered a similar trend (Figure 1), with warfarin still maintaining the lead, albeit reduced compared to 2018, with apixaban still progressing further ahead of rivaroxaban, and with dabigatran now ahead of edoxaban. 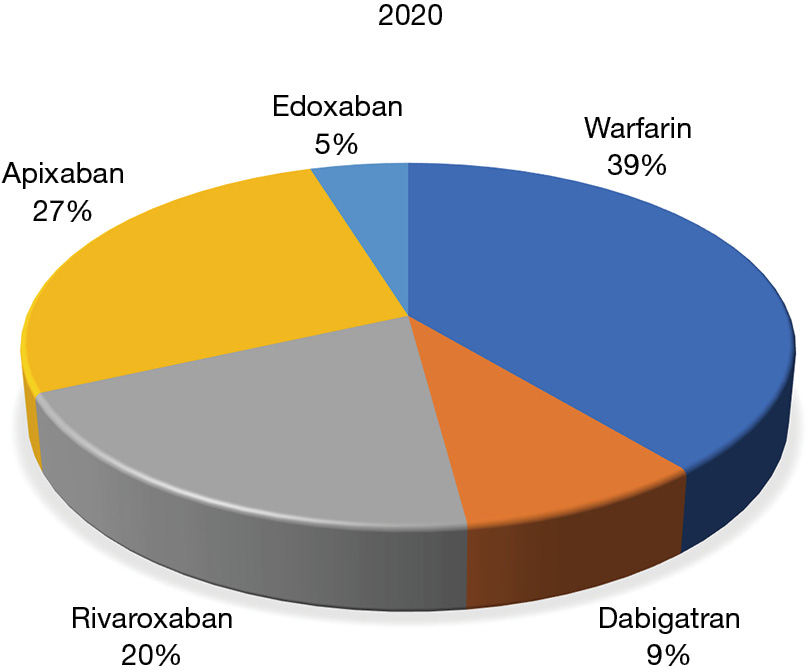 Figure 1 Results of a recent search in Google Trends related to the common anticoagulants, and reflecting an update to a past publication in this series (6). Website address accessed 19th August, 2020: https://trends.google.com/trends/explore?date=today%203-m&q=warfarin,dabigatran,apixaban,edoxaban,rivaroxaban

This series leading paper is supplemented by a succession of papers focusing on anticoagulation therapy in specific regions of the globe, including Australia (7), Italy (8), Slovakia (9), Iran (10) and France (11). This is further supplemented by other contributions from Finland (12) and the United Kingdom (13).

For Australia, the Guest Editor and colleagues provide a narrative review, written in 2018, where they briefly outlined the anticoagulants available in Australia, their relative strengths and weaknesses, and the ever-changing local landscape with regards to anticoagulation therapy. In particular, the worldwide trend in Google Trends searches (6), tends to be mirrored in terms of drug usage in Australia, with clear ongoing reduction in warfarin prescribing contrasting the steady increase in prescriptions for all the DOACs, although most notably for the anti-activated factor X (FXa) agents (rivaroxaban and apixaban). This usage is paralleled by a reduction in laboratory monitoring for warfarin, and an increase in overall drug usage costs. The authors have recently updated this data in 2020 (14).

For Italy (8), Dr. Franchini summarizes the organization of anticoagulant therapy in that country, representative of a location where thrombosis represents a health problem of great social relevance. In summary, anticoagulation therapy in Italy has evolved in the last two decades, greatly improving the management of patients with thrombosis. The socioeconomic burden of such an organizational model is, however, high and requires continuous resources directed to the implementation of the staff of thrombosis centers to respond to the growing demand arising from the aging of the population at increased thrombotic risk. The progressive involvement of adequately trained general practitioners working in close collaboration with FCSA (Federation of Centers for Diagnosis of Thrombosis and Surveillance of Antithrombotic Therapies) centers could be a way to resolve this critical issue, overcoming the current imbalance between patients requiring anticoagulation treatment and caregivers.

For Slovakia, Dr. Stanciakova and colleagues overview the state of anticoagulation therapy in that country, with the focus on DOACs, as also represented by the National Centre of Haemostasis and Thrombosis, which provides the comprehensive care for a substantial group of patients from the Slovak Republic. They report on the characteristics of their patient population (age, sex, family history, results of thrombophilic screening, and indication for the use of anticoagulant therapy), as well as their experience with administration of DOACs in routine clinical practice, their indications in terms of prevention of venous thromboembolism, and results of measurement of their effectiveness and other parameters of the activation of hemostasis.

For France (11), Dr. Jourdi and colleagues identify that significant changes have been brought to more recent anticoagulant therapeutic and prophylactic strategies in that country. They advise that health professionals need to be aware of the benefit-risk profiles of DOACs as well as of heparin derivatives and VKAs in order to deal properly with these drugs, making sure that the right patient gets the right anticoagulant therapy at the right time. In this review, the authors briefly overview the anticoagulant drugs available in France in 2020, and then outline different management strategies and suggestions of national expert groups.

For Finland (12), Dr. Helin and colleagues identify that while DOACs are increasingly used in common indications for anticoagulation, including non-valvular atrial fibrillation, deep vein thrombosis and pulmonary embolism, traditional anticoagulants, either warfarin or heparins are still the primary choice for patients with cardiac valvular replacement, severe thrombophilia, pediatric, pregnant and many cancer patients. Laboratory monitoring of warfarin and heparins is well established, while under specific emergency conditions DOACs require specific assays, the availability of which may be limited. Finland benefits from centralized laboratory networks, offering harmonized services throughout our rather sparsely populated country. Specific assays for all DOACs are available 24/7 in the core laboratory (Southern Finland). Interaction, collaboration and continuous education between clinic and laboratory is increasingly needed, under the era of rapid change of traditions in anticoagulation management.

For the United Kingdom (13), Dr. Mould and colleagues identify that region to be one of the first to implement rigorous thromboprophylaxis measures to reduce the risk of hospital acquired thrombosis. More recently, with the arrival of DOACs, active screening for atrial fibrillation has been made a priority nationwide. Also, better awareness of the signs and symptoms of venous thromboembolism means patients are getting the best treatment early, thus preventing complications. Despite all these positive efforts, some aspects of anticoagulation therapy have been recently noted to represent problem areas, and are further discussed in this review.

A separate contribution from the United States of America is provided by Robert Gosselin and colleagues (15). Implemented in 2003, the Joint Commission on Accreditation of Healthcare Organizations (JCAHO, later known as just Joint Commission) implemented required initiatives for accredited institutions that provide health care services for improving patient safety. The first six National Patient Safety Goals (NPSG) required these institutions to address and improved the identified short comings associated with patient misidentification, communications between caregivers, use of high-alert medications and drug infusion devices, reduction of surgical errors, and clinical alerts. In 2005, JCAHO implemented a new NPSG, labelled as Goal #3c, designed to improve safety of medication use, and in 2008 specifically addressing anticoagulants. The purpose of this review is to describe the laboratory and pharmacy department roles addressing the current eight required NPSG elements related to anticoagulation safety.

In a final manuscript related to anticoagulants (16), McGlasson and Fritsma explore the in vitro detection and removal of DOACs from patient plasma specimens, in cases where laboratory testing may be required and the effects of DOACs mitigated. Medical laboratory scientists are often called upon to detect and identify the presence of DOACs in patient plasma, especially in emergent circumstances. Clot-based or chromogenic laboratory assays are often required to detect coagulopathies, coagulation factor inhibitors, or lupus anticoagulants but are limited by the presence of therapeutic anticoagulants that may invalidate the accuracy of the assay by falsely prolonging clot-based assay intervals and influencing chromogenic assay results. The authors describe a semiquantitative urine reagent strip, DOAC-Dipstick® that may be employed to detect all DOACs in urine and distinguish oral DTIs from oral anti-FXa inhibitors. The authors further describe four similar devices, DOAC-Stop®, DOAC-Remove®, DP-Filter® and DOAC Filter®, designed to remove DOACs from plasma by adsorption, filtration and precipitation, while essentially leaving intact native procoagulants suitable for testing. These devices employ activated charcoal (carbon) or similar formulations for adsorption. The authors conclude that by judiciously selecting and applying these devices and observing their limitations, laboratories may report clot-based and chromogenic substrate results, as alternately affected by DOAC presence, with reasonable confidence.

As the Guest Editor for this series, I hope that the readership of AOB enjoys the current compilation, and that these initiatives lead to improvements in the management and clinical support of patients suffering from thrombosis or other adverse clinical conditions, managed or potentially managed with antithrombotic drugs. Nonetheless, I also recognise some limitations and omissions in this series. First, it was never my intention to provide a definitive series encompassing all potential antithrombotics and all potential conditions and situations for usage. That would be an impossible task. Also, the main focus of the series is on anticoagulant therapy, and most articles are focussed on the DOACs. This is appropriate and timely, since these drugs continue to emerge as those most relevant to contemporary anticoagulant therapy. Even here, however, it needs to be recognised that new DOACs are ever-emerging, and thus reflect a non-static area in terms of usage and indications (18). More notably, we are now in the era of COVID-19, and this reflects an increasing area of interest for antithrombotics (19,20), given the elevated risk of thrombosis in severe COVID-19. Naturally, anticoagulants are well represented as areas of interest (19), but the list of potential medications is very large indeed (20). On the other hand, antithrombotic use is not without risks (21).

Other areas of interest can also be noted, in particular the danger of both false positive and negative diagnosis of various prothrombotic markers according to the presence of anticoagulant therapy (22,23), and the use of agents to neutralise DOACS ahead of laboratory investigations (16), particularly into prothrombotic markers (24-26), but also markers of bleeding (27).

Thus, this series reflects a story still not fully told, and we may consider an update in a few years time.

Provenance and Peer Review: This article was commissioned by the editorial office, Annals of Blood for the series “Anticoagulant and Antithrombotic Therapy: Globally Applied According to Local Geographical Selection Criteria”. The article did not undergo external peer review.

Conflicts of Interest: The author has completed the ICMJE uniform disclosure form (available at http://dx.doi.org/10.21037/aob-2020-aat-013). The series “Anticoagulant and Antithrombotic Therapy: Globally Applied According to Local Geographical Selection Criteria” was commissioned by the editorial office without any funding or sponsorship. EJF served as an unpaid Guest Editor of the series. The author has no other conflicts of interest to declare.

Ethical Statement: The author is accountable for all aspects of the work in ensuring that questions related to the accuracy or integrity of any part of the work are appropriately investigated and resolved. The opinions expressed in this review are those of the author, and not necessarily those of NSW Health Pathology. 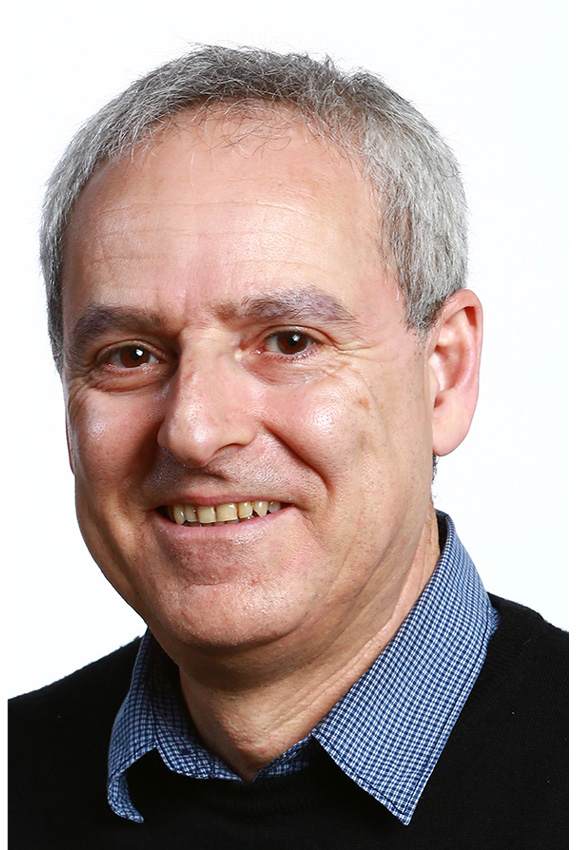