Blood donors are considered to be a healthy population or healthier group of people. As part of donor screening, blood pressures are measured in potential donors before each donation.

In this study, we determined the prevalence of hypertension among blood donors at a large regional blood donation center, Bloodworks Northwest (NW) in the Pacific Northwest, using the updated 2017 ACC/AHA guidelines. We then examined the proportion of hypertension in different subsets of donors, further categorized by gender, age and ethnicity. These donor subgroups were subsequently compared with their national counterparts. We present the following article in accordance with the MDAR checklist (available at http://dx.doi.org/10.21037/aob-20-12).

Donation records (de-identified) from January 1, 2017 to December 31, 2017 were retrieved from the centralized database at Bloodworks NW. Directed, autologous, and therapeutic donations were excluded. Only donors who made voluntary donations of whole blood or apheresis donations of red cells, platelets or plasma were included. The study was conducted in accordance with the Declaration of Helsinki (as revised in 2013). The study was approved by Western Institutional Review Board (WIRB) review board (No. IRB00000533) and informed consent was waived because of minimal risk. Before blood pressure readings were taken, potential blood donors would first register for blood donation and then sit down to fill out a questionnaire followed by a sit-down interview for confirmation of donor information and answers to blood donation survey. Blood pressures were measured using validated and calibrated sphygmomanometers by trained phlebotomists, following the blood donation center’s standard operating procedure for pre-donation blood pressure measurements.

Donors were then divided into different subsets in the same manner as the published analysis of National Health and Nutrition Examination Survey by Muntner et al. (3). Five different age groups were created: 20–44 years of age, 45–54 years, 55–64 years, 65–74 years or >75 years. Ethnicity was classified as non-Hispanic whites, non-Hispanic blacks, non-Hispanic Asians, or Hispanic. Hypertension percentages of the various subgroups of blood donors at Bloodworks NW were then compared to the US population estimates as determined by Muntner et al. (3).

Data extraction was performed by Tableau Desktop (Seattle, WA), Microsoft Access (Redmond, WA), and Microsoft Excel (Redmond, WA). Analysis was performed using statistical software, RStudio v1.0.136 with R version 3.4.3 (Boston, MA). We utilized bootstrapping to better understand the accuracy of our sampling estimates. Bootstrapping falls under the broader category of resampling methods. In this study, we generated 95% confidence intervals by resampling our dataset 1,000 times, computing the percentage of those with hypertension, and then calculating the normal statistics of the resulting distribution.

For one year from January 1, 2017 to December 31, 2017, 116,270 potential donors presented at Bloodworks NW in the Pacific Northwest. Blood pressures were measured and recorded before each attempted blood donation. Forty-four percent of the donors donated 2 or more times during that year, and for those donors, only the blood pressure from the first donation of the year was used for the study.

Tables 1 and 2 summarize the SBP and DBP readings of all blood donors at Bloodworks NW in 2017. The mean and median SBP was at or above 120 mmHg except for the female donors. The mean and median DBP was under 80 mmHg except for the median DBP (80 mmHg) in male donors. However, a high percentage of donors (57.4% and 44.9%, respectively) did not have normal SBP (<120 mmHg) nor normal DBP (<80 mmHg). 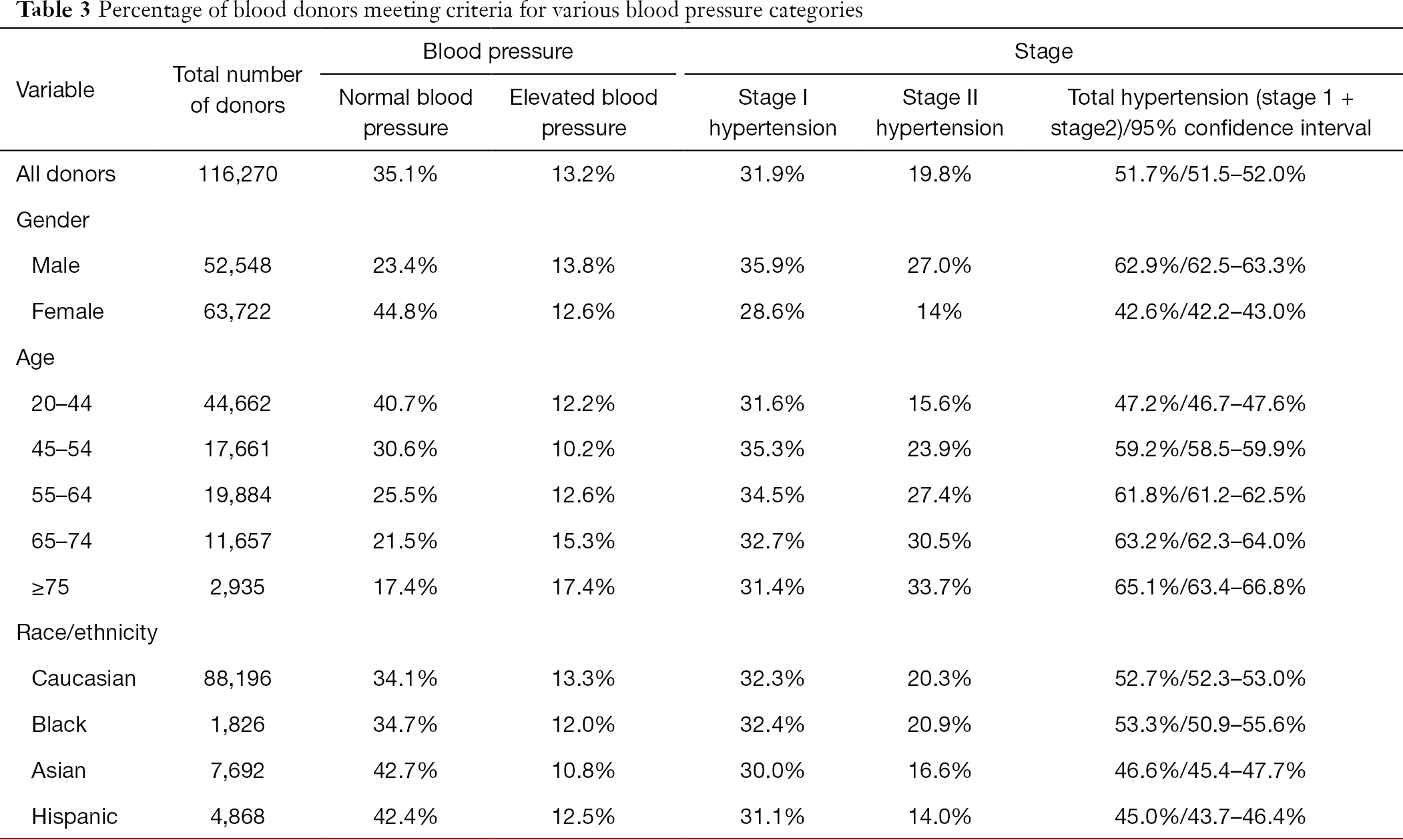 Comparison to US population at large 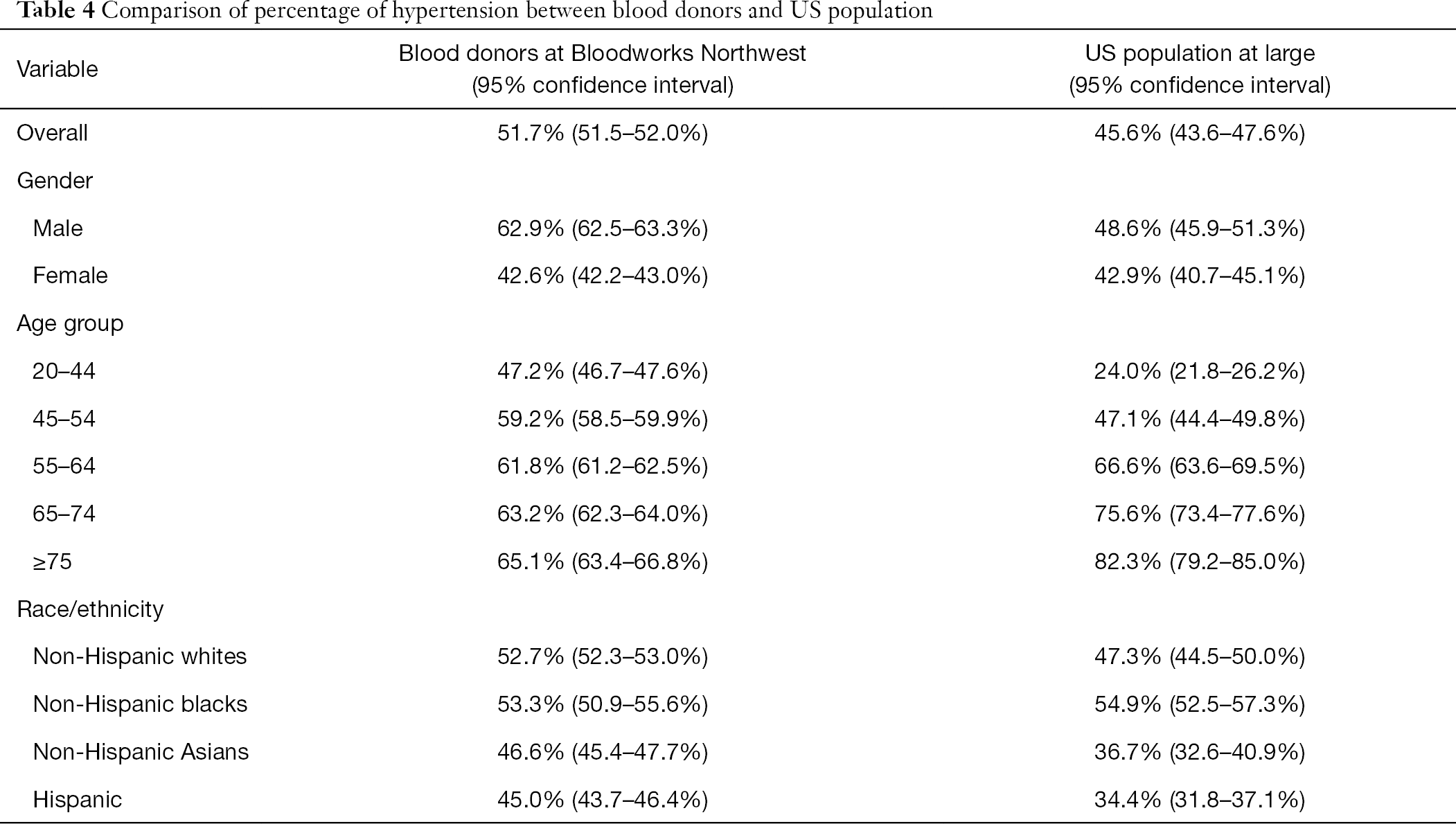 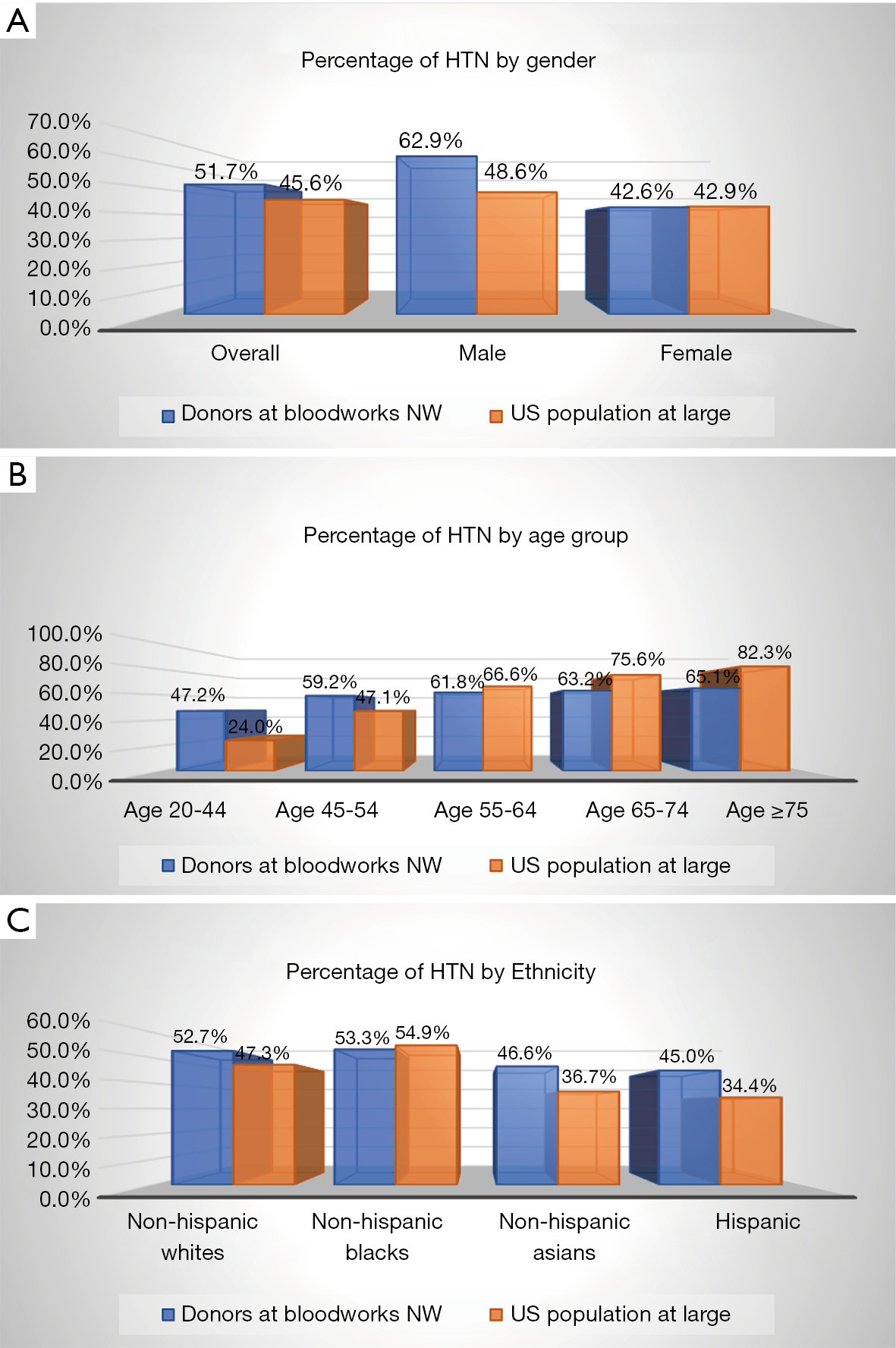 Figure 1 Percentage of hypertension between blood donors & US population (A) in gender subgroups; (B) in age subgroups; (C) in ethnic subgroups.

Of male blood donors, 62.9% were deemed hypertensive in contrast to 48.6% in the general population (Figure 1A). Female donors fared better with hypertension in 42.6%, which was very comparable to the general female population of 42.9%.

Except for the non-Hispanic black donor subgroup, the other three ethnic groups of blood donors showed higher percentages of hypertension than their population counterparts, higher by about 5–10% (Figure 1C). A slightly lower percentage of the non-Hispanic black donors at Bloodworks NW had hypertension in comparison to their population counterparts (53.3% versus 54.9%, respectfully). We were not able to assess the statistical significance of this difference.

Blood pressure in the pre-donation step is generally measured once per standard operating procedures, and lack of two measurements on separate days may be considered a limitation to this study. In addition, the statistical significance of the differences noted in the percentage of hypertension between the blood donor subgroups and their national counterparts cannot be assessed because the US population estimates were determined by calculations using sampling weights.

Although blood donors are generally considered “healthy,” more than 50% of blood donors at Bloodworks NW may be considered hypertensive according to the updated 2017 ACC/AHA guidelines. This unexpected high prevalence indicates the need for more studies on a national and international level to confirm the findings in this study and to assess the need for further action to promote donor health. In addition, depending on the region, up to 10% of population comprised of different ethnic groups are blood donors (4), therefore health promotion in blood donors can be an effective means in preventive care.

Significant percentage of hypertension among blood donors indicates a need and an opportunity for blood donation centers to improve donor health through blood pressure screening and education on hypertension.

Reporting Checklist: The authors have completed the MDAR checklist. Available at http://dx.doi.org/10.21037/aob-20-12

Conflicts of Interest: All authors have completed the ICMJE uniform disclosure form (available at http://dx.doi.org/10.21037/aob-20-12). Dr. YW serves as an unpaid editorial board member of Annals of Blood. The other authors have no conflicts of interest to declare.

Ethical Statement: The authors are accountable for all aspects of the work in ensuring that questions related to the accuracy or integrity of any part of the work are appropriately investigated and resolved. The study was conducted in accordance with the Declaration of Helsinki (as revised in 2013). The study was approved by Western Institutional Review Board (WIRB) review board (No. IRB00000533) and informed consent was waived because of minimal risk.