Hepatitis C virus (HCV) had been found for the first time in 1989 (1). Blood transfusion is still one of the most important transmission route of HCV infection in developing countries up to the present. The epidemic trend of HCV is still not optimistic in China (2). The common HCV genotypes in China are type 1b and 2a, and type 1b accounts for 60% to 70% of those infected with HCV (3,4). In the past 30 years, the detection strategy of HCV infection has evolved from detection of HCV antibody alone to antigens-antibody combined detection with nucleic acid detection, which is widely used currently In China. Enzyme-linked immunosorbent assays (EIA) assay mainly depends on two kinds of domestic anti-HCV EIA reagents or one imported /one domestic reagent according to the “Blood Donation Law”. Beijing Red Cross Blood Center has adopted the latter pattern which has a relatively higher false positive rate (S/CO between 0.7 and 3.8) even though there is a well-known imported reagent. As reported by Warkad et al. that anti-HCV antibodies show high false-positive rates among populations with low (<10%) prevalence of HCV infection (5). Since the EIA reagent cannot distinguish whether the reaction site is directed against the viral protein region or against the non-structural regions (including NS3, NS4, NS5) (6), Chiron developed RIBA 3.0 which is a qualitative immunoblotting strip reagent and had been used as the preferred supplementary serological testing method and gold standard for the diagnosis of HCV infection due to its robust specificity (7).

However, Chiron RIBA 3.0, as the only supplemental anti-HCV test licensed by Food and Drug Administration (FDA), has been permanently discontinued since 2011.A domestic supplemental confirmatory reagent, CWT, has acquired the license from China Food and Drug Administration (CFDA) recently. The manufacturer recommends CWT as supplemental confirmatory regents for blood donors. The epidemic strains of HCV in Mainland China are different from those in Western countries. Therefore, this study intends to preliminarily explore the applicability of CWT in mainland China by comparing the confirmation performance of RIBA 3.0 and CWT on the same batch of specimens.

The study was conducted in accordance with the Declaration of Helsinki (as revised in 2013). Ethical approval for this study was considered unnecessary by the Ethics Committee in our institution (Beijing Red Cross Blood Center) since the “Development of HCV antibody RIBA diagnostic reagent” research project (No. 2008ZX10002-012) has been ethically demonstrated at the time of approval and no patient identifiable data was shared. Informed consent was taken from all the blood donors.

Five hundred and thirty specimens collected from unremunerated blood donors of Beijing Red Cross Blood Center (BRCBC) which were tested anti-HCV reactive by two rounds of EIA according to the screening regulation of National Transfusion Transmitted Infectious Diseases, then the supernatant was taken and stored in a refrigerator at –80 °C separately.

All samples were reactive at least with one kind of EIA kit.

For RIBA 3.0, the recombinant HCV-encoded antigen and the synthetic HCV-encoded polypeptide have been fixed on the test strip respectively. Among them, Core and NS4 are synthetic antigens, derived from the presumed viral nucleocapsid protein and non-structural protein respectively.NS3 and NS5 and hSOD are recombinant expression antigens derive from E. coli and S. serevisiae (the latter two protein).

For CWT supplemental tests, NS3, NS4-1, NS4-2, NS5, Core protein and two control line proteins were coated on the nitrocellulose strip. Among them, NS3 and control line proteins are recombinant antigens expressed in E. coli. NS4-1, NS4-2, NS5 and Core protein are synthetic proteins. The control lines 1 and 2 must appear at the same time in each experiment. If only one or both of two lines are absent, the experiment is invalid.

The above 530 serum specimens were tested with RIBA 3.0 and CWT at the same time.

In EIA assay, the anti-HCV detection COI ratio >0.7 specimens were retested by double-well. If one well is reactivity the sample was judged as positive, and double- well of non-reactivity were negative.

Supplemental tests of RIBA 3.0 and CWT were operated according to the instruction, and the judgment criteria for the result interpretation for the latter are shown in Tables 1 and 2. The intensity of the colored bands is proportional to the amount of bound antibody and is graded as – (none), ± (indetermination) and 1+ to 2+.

The positive detection rate of CWT and HCV RIBA 3.0

The overall positive rate of the two confirmation reagents

The frequencies of the specific antibody response to the different HCV peptides were studied. The frequency of CWT was NS3, Core, NS4 (NS4-1, NS4-2) and NS5 from strong to weak, while that of RIBA 3.0 was Core, NS3, NS4 and NS5 (Table 3). 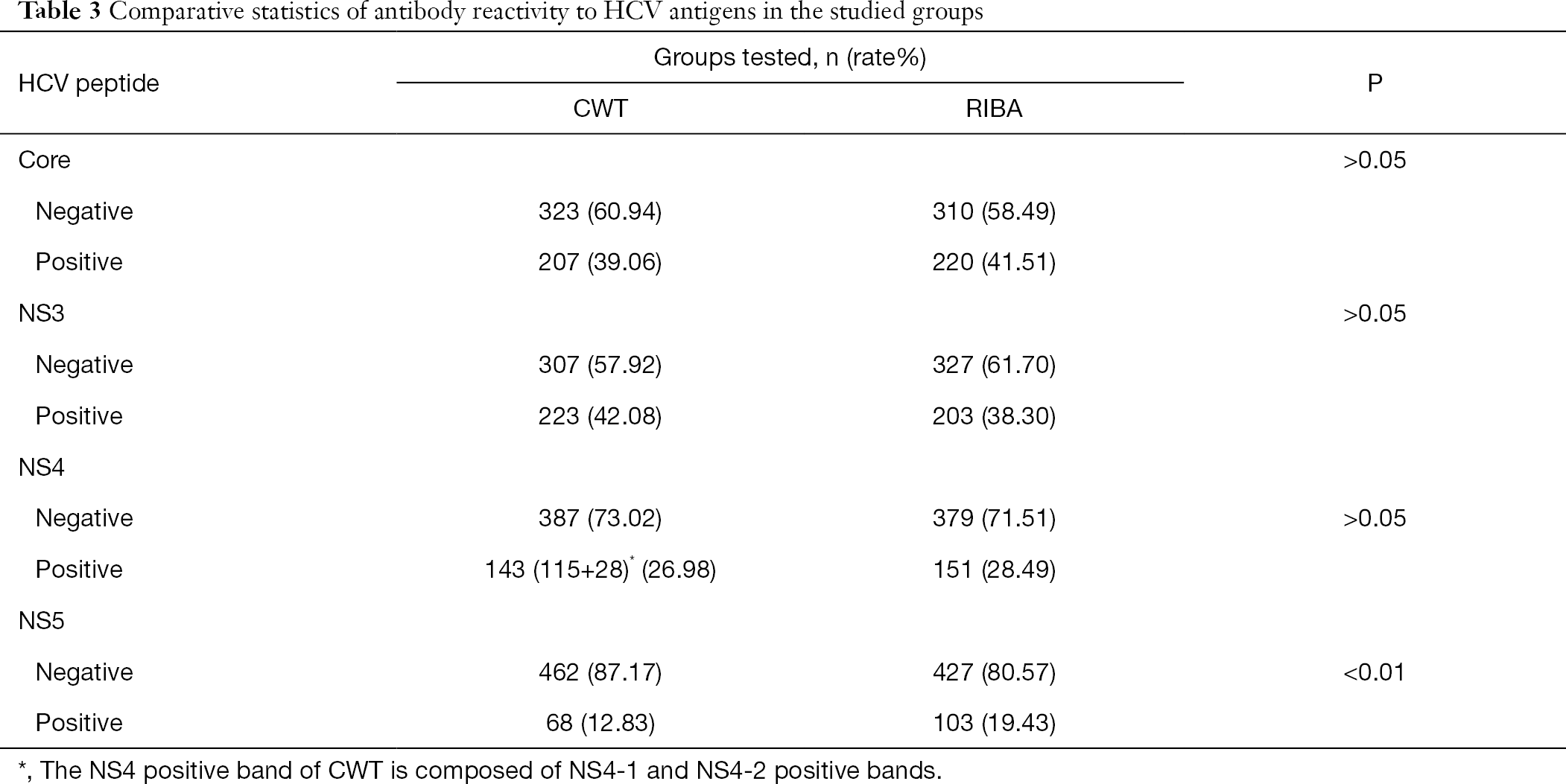 The diagnostic results of HCV RIBA 3.0 and CWT supplementary experiments are generally consistent (kappa=0.445, P<0.01); And the positive rate of CWT is 34.3%, which is significantly higher than 30.2% of RIBA 3.0, and the difference is highly statistically significant (P<0.01).

Analysis of the number of the positive bands of CWT and RIBA 3.0 reagent

Table 5 Correspondence between the number of different positive bands of CWT and RIBA 3.0
Full table

The consistency of CWT and RIBA 3.0 different antigen detection

The residual risk of HCV declined over the last decade due to improved screening reagents, implementation of the nucleic acid amplification test, and tight application of strict donor selection procedures. However, due to China’s unique HCV epidemic strains and certain deficiencies in domestic indirect HCV antibody EIA reagents (the purity of genetically engineered or synthetically prepared fusion protein antigens is insufficient) and the state of blood samples (hemolysis, high IgG concentration, etc.) high false-positive rates among blood donors persists. Supplemental anti-HCV tests are designed to resolve such false-positive testing by EIA. They can help optimize the detection efficiency of anti-HCV reagents and improve the laboratory detection accuracy (conformity rate). On the other hand, they can help to determine whether the donation of blood donors would be delayed indefinitely or recalled again after a certain interval.

One hundred and fifty-two cases of CWT NS3 positive were involved in 203 cases of individual NS3 positive RIBA 3.0 indeterminate samples. Among the remaining 51 specimens, 2 cases (NO. 1076, 1626) were CWT positive for core peptide common with NS4 or NS5 respectively. Five specimens were CWT indeterminate including 4 positive for core peptide and 1 positive for NS5 peptide.NS3 is always used in diagnosis for its highly immunogenic as well as nucleoside triphosphatase and helicase activity. NS3 and NS4-1 form the active, heterodimeric serine protease which is the target of medicinal chemistry efforts (10).

In addition, positive NS3 indicates a greater likelihood of active HCV infection (11). Isolated Core or NS3 reactivity means a higher probability of true presence of anti-HCV antibodies and may be the sign of acute or chronic HCV infection in case of a high S/CO ratio and strong reactivity on the immunoblot assay (12,13). Therefore, high detection ability for NS3 of CWT can better identify active HCV carriers in blood donors.

The drawback of the third-generation EIA assays was that the low positive predictive values in a low prevalence of HCV infection (<10%) (5) which require confirmation with other more specific supplementary tests. So due to its robust specificity, RIBA had been used as the preferred test for a long period. Even now some researchers reported that RIBA is still necessary for the detection of false positive cases which occur quite frequently in countries of high prevalence (14).

Screening tests for antibodies to HCV may generate up to 32% false positivity in low-risk populations (17). Fu et al. advised that HCV donor screening procedures should be improved by incorporating confirmatory testing into routine blood screening in blood center to reduce unnecessary donor loss, which should be a better way to monitor and control the risk of transfusion-transmitted HCV infection at present in China (16).

The low positive rate (24.2%, 128/530) of confirmatory test of EIA screening positive samples in our study suggests that the specificity of anti-HCV EIA reagents for blood screening still needs to be improved. Furthermore, confirmation is valuable for surveillance in the absence of HCV RNA testing (17). The number of positive cases confirmed by CWT is higher than that of RIBA 3.0 (182:160), which also proves the applicability of CWT in China. In fact, for countries with moderately high HCV prevalence, RIBA can still play a “gold standard” in measuring the detection capacity of newly developed HCV EIA reagents and determining inconsistent/ discrepant results (18).

Indeterminate RIBA results could involve instances in which past HCV infections occurred without total elimination of the antibodies (19). Makuria et al. (20) also reported that RIBA indeterminate blood donors were older than spontaneously recovered subjects or chronic HCV carriers. The older age suggests that their HCV exposure might have been in the remote past so that some anti-HCV antibody responses to have waned. The proportion of CWT indeterminate results were a little high (97/530) in our study, but due to consideration of protecting personal privacy, we did not further analyze the age of blood donors.

Except for RIBA, the corroboration of HCV infection can also be confirmed by another confirmatory testing method, HCV-RNA detection. In our experiments, It is regretted that HCV-RNA detection had not been done for the CWT indeterminate specimens due to the volume limitation of part of specimens and deficiency of nucleic acid testing equipment. Pereira et al. (7) reported that 14 blood samples with indeterminate RIBA results had undetectable viral loads (detection limit ≤50 IU/mL). The results are still the same even though 71.4% (10/14) of these samples were reevaluated six months later. So he concluded that individuals with indeterminate RIBA results had no detectable HCV-RNA. However, Pawlotsky et al. reported that 31 (52.5%, 31/59) RIBA 3.0 indeterminate serum samples were HCV RNA positive by PCR (21).

Reporting Checklist: The authors have completed the MDAR checklist. Available at http://dx.doi.org/10.21037/aob-20-67

Conflicts of Interest: All authors have completed the ICMJE uniform disclosure form (available at http://dx.doi.org/10.21037/aob-20-67). The authors have no conflicts of interest to declare.

Ethical Statement: The authors are accountable for all aspects of the work in ensuring that questions related to the accuracy or integrity of any part of the work are appropriately investigated and resolved. The study was conducted in accordance with the Declaration of Helsinki (as revised in 2013). Ethical approval for this study was considered unnecessary by the Ethics Committee in our institution (Beijing Red Cross Blood Center) since the “Development of HCV antibody RIBA diagnostic reagent” research project (No. 2008ZX10002-012) has been ethically demonstrated at the time of approval and no patient identifiable data was shared. Informed consent was taken from all the blood donors.